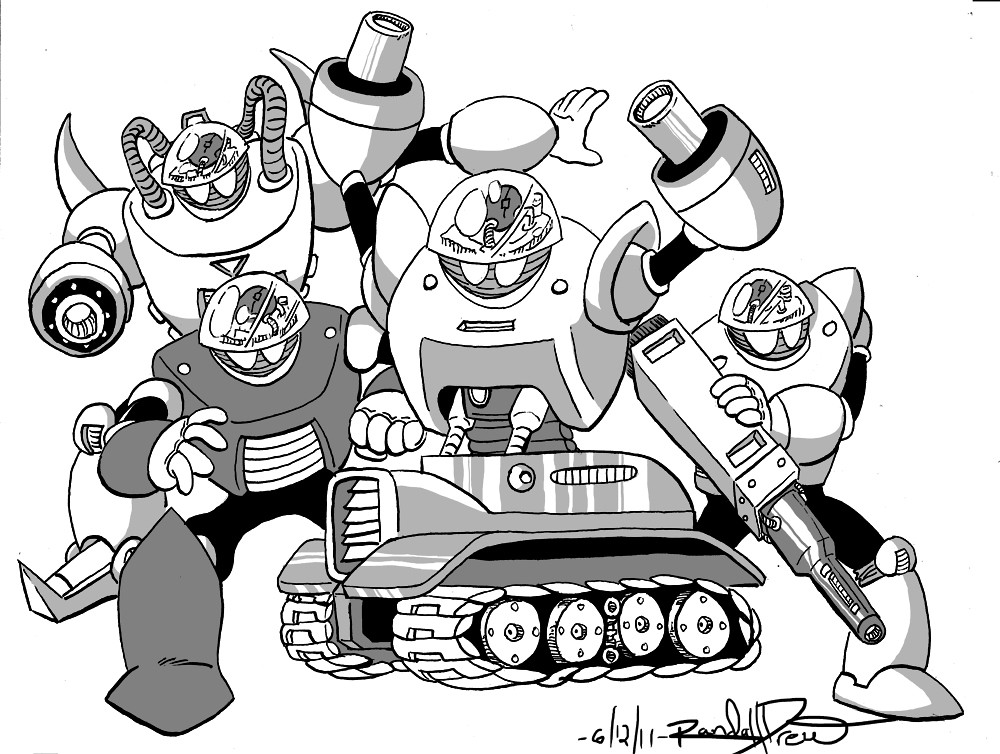 Here’s some fan art I did Saturday for Matt Aucoin’s Mega Manthology, a quick pinup piece featuring all 4 Dark Man forms from Mega Man 5! I broke out the G-Nib to ink this piece, which I haven’t used in a while, to get thinner lines much closer to the ones in the original character designs from Capcom. I still like that the G-nib gives me some line weight however. 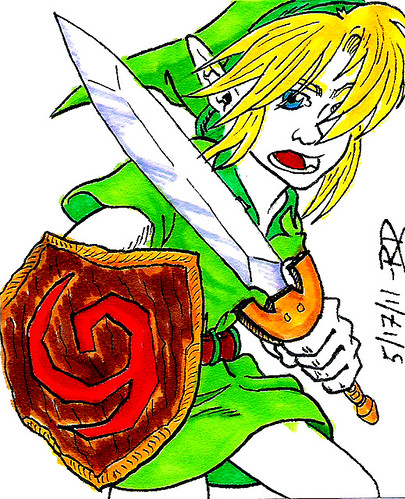 LoZ: Ocarina and Time 3D is on it’s way and even though I don’t own a 3DS, I’m very excited to see this absolute, game-changing classic adventure get a little TLC and updated graphics! I doodled up a Young Link, a kid favorite, with his Kokiri Sword and Shield! Toon Link will be coming up soon I have a feeling! Another card that needs a skin tone, but my default peach was too strong. 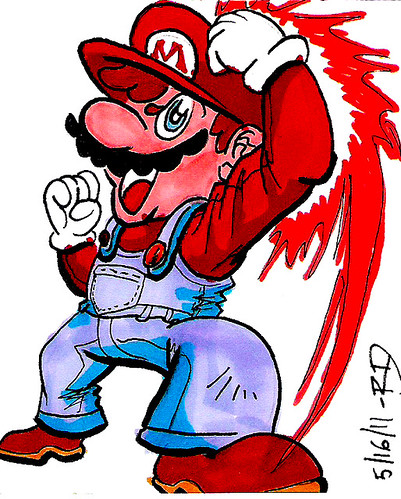 Everybody’s favorite plumber hero is here! While I was a Sonic fan first, Jump-man himself was always right behind! I’ll get around to his brother eventually as well. 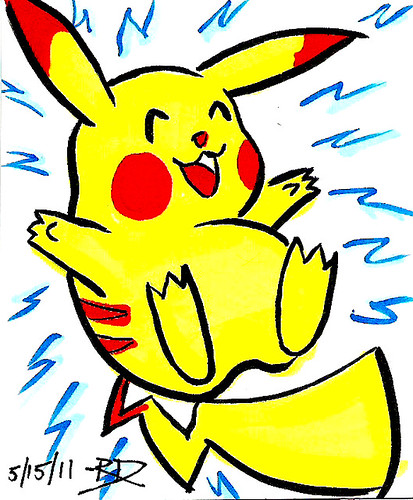 HvV is the first official collaboration between the two VGM Remix/Rearrangement community giants and also the first official collaboration between myself and the community! Click the top link to go directly to the amazing album official release page, designed by the very talented Chris “Mazedude” Getman, who also co-directed the project and did TWO remixes as a member of the Bad Dudes!

With the official release of the album, I can now present a very special offer here at RKDIA COMICS: 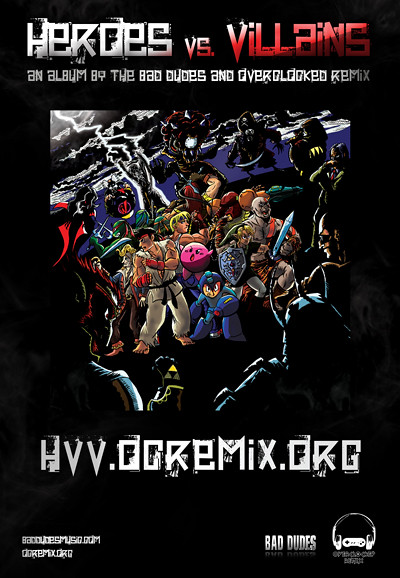 Special edition, signed poster prints of the Official HvV Project Poster (seen in a preliminary edition at MAGFest) are now for sale at the RKDIA COMICS store! Just click RIGHT HERE to grab one of these one-of-a kind poster prints for only $10! Price includes shipping, even Internationally!

These high quality posters are printed on 11″x17″ 67lb White Cover Stock paper and signed by me. I can even add personalization, just leave it in the notes/comments section of your PayPal order. If you don’t have PayPal and would like to arrange for another way of paying, feel free to email me at drewr@sage.edu! 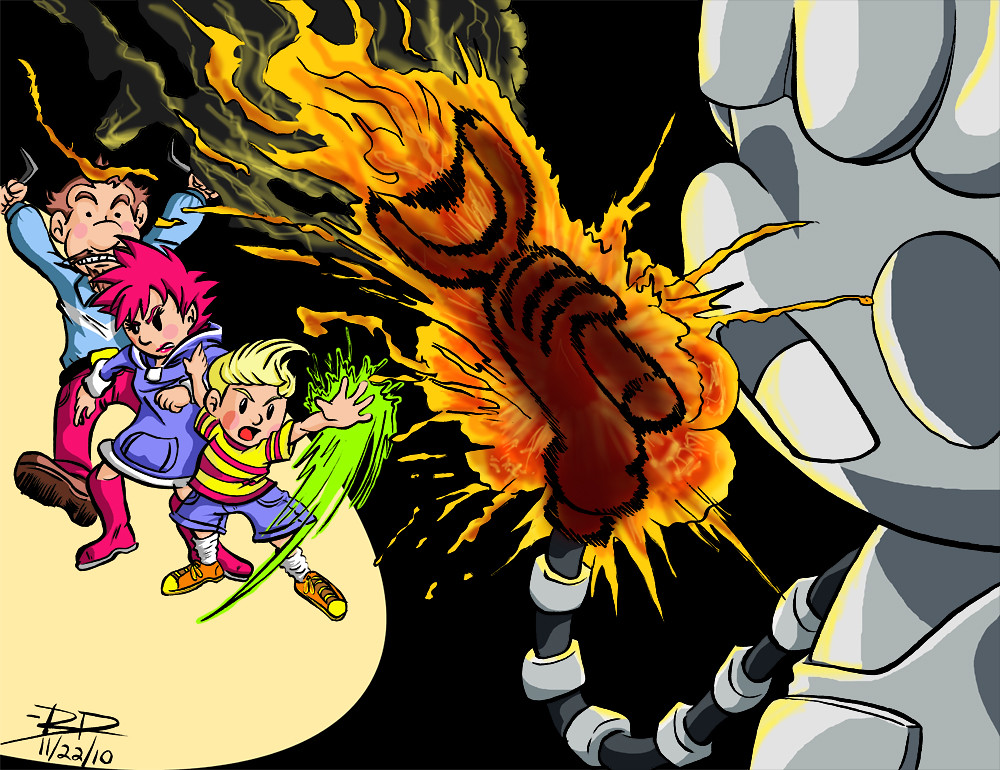 Colored version of yesterdays ink post. Check it out for more details on Mother 3!

Check out the video of this over at my JTV page! 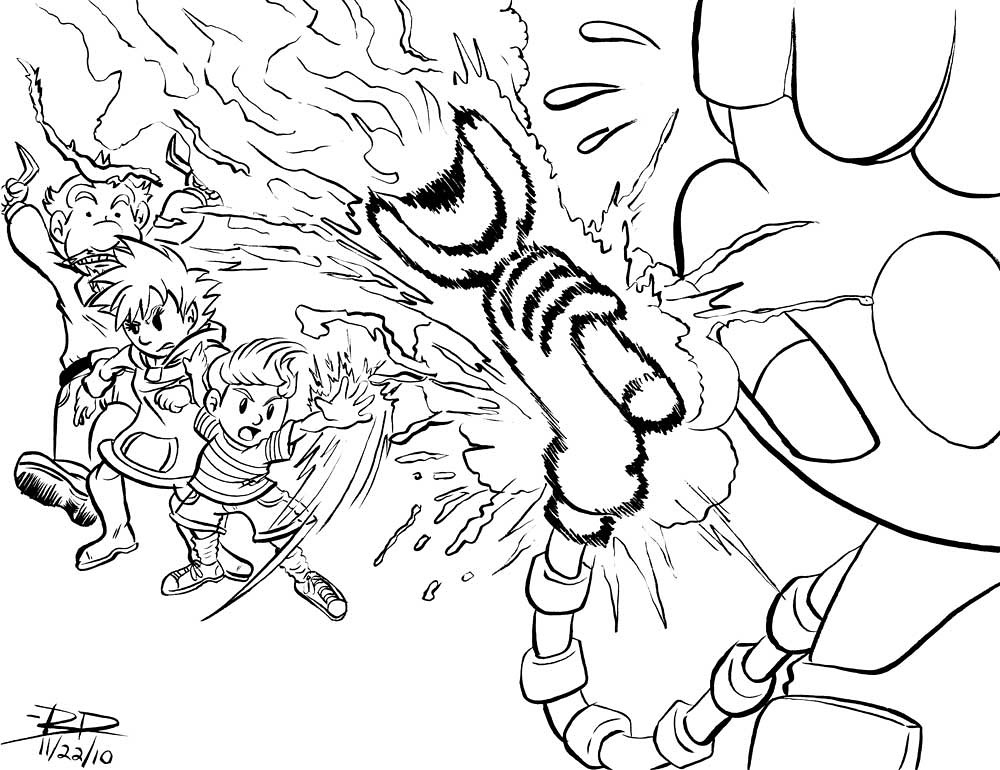 Since I covered the great Maximo Lorenzo, aka 8bitMaximo on Sunday’s Ink-Slinger Spotlight, I figured I’d tackle one of his, and my, favorite games; Mother 3. Known as Earthbound in the West, Mother 3 concludes the 3-game series with a compelling, emotional storyline, ties up loose ends from the end of Mother 2 (Earthbound for the SNES) and offers a memorable, fantastic score and very fun and funny RPG gameplay.

Though the final cast is large, your three main protagonists, seen here left to right are Duster the thief, Princess Kumatora, and Lucas. Each with their own reasons for journeying together, but all with the same goal; awaken the dragon that sleeps beneath their island before the troops of the dimensional traveling Porky can! One of the hardest fights in the game is against an enormous living statue of Porkey in his modern metropolis of New Pork City. The statue makes a cameo in a stage of the same name in Super Smash Brothers Brawl for the Wii, where Lucas is also a playable character.

Sadly, despite a massive appeal from a large fan base to Nintendo of America, Mother 3 (released for the Gameboy Advance over 10 years after Mother 2 (Earthbound)) was never brought to America. A fan-patched translation is available, check google. I would highly reccomend you play this game. It’s story is unforgettable and will stay with you. A fitting end for a long-cherished series.’

I’ll be coloring this piece LIVE today at 4pm EST over at my JTV page. Please come by and say hi! Tomorrow I’ll post the finished art!

There’s not much I can say that the pictures won’t! The return of FAGFest was a huge success and hosts JoeCam and Ashley were awesome as always opening their beautiful new place up for all us nerds to crash at.

Again, the awkward name is a play on MAGFest, the Music and Gaming Festival which occurs every January in Alexandria, VA and the fact that the guys WAY out number the women. This coming together of the various parts of the VGM Remix community always seems to come at a much needed time, and is a great way to refresh ourselves from the daily grind.

Without further ado however, here’s the highlights, caught on (digital) film! 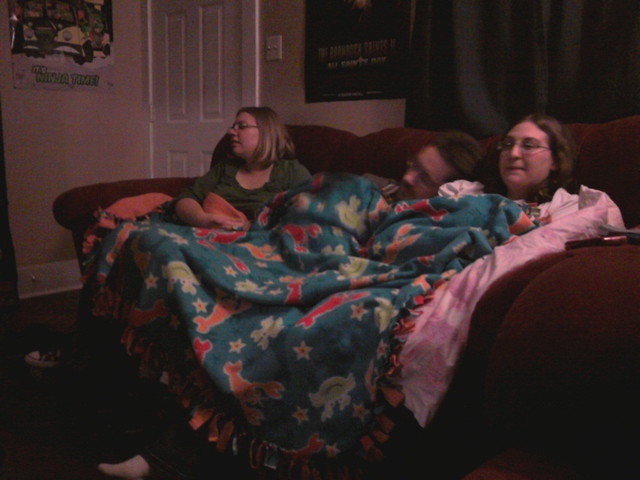 Contrary to popular belief, there actually ARE girls that come to FAGFest parties (Other than JoeCam’s wife Ashely, who Ian is taking a nap against) 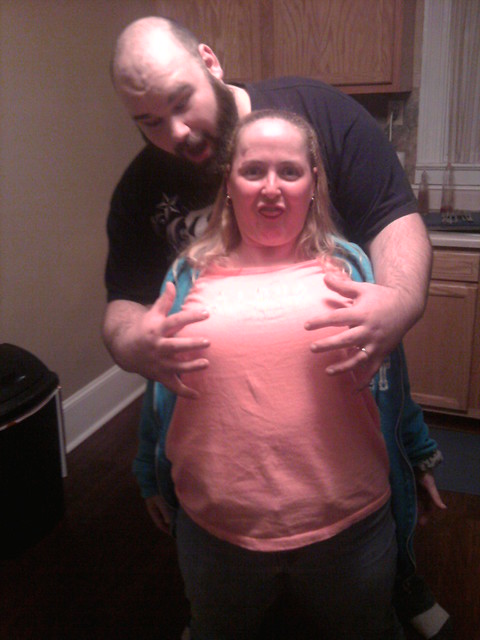 Josh (Riallatar’s) Wife Ginnette shows the boys it’s not all about us at FAGFest. Joe takes interest. 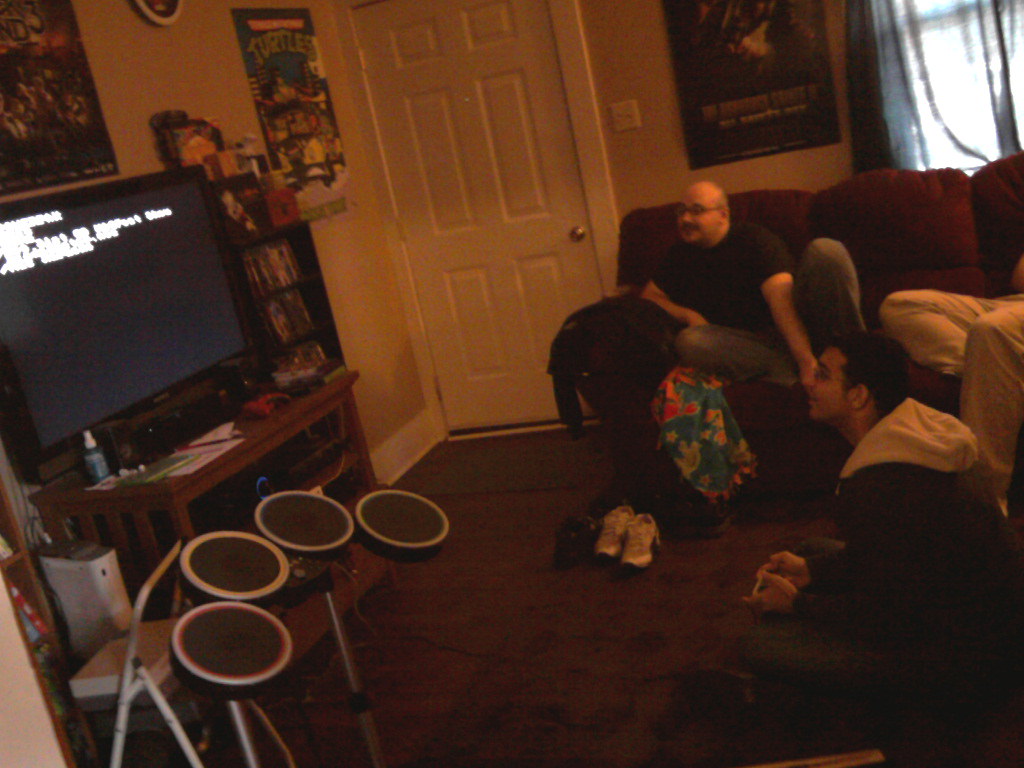 What’s a nerd party without video games?! Kunal boots up Shael Riley’s hacked NES as the pedo-stached musician looks on. 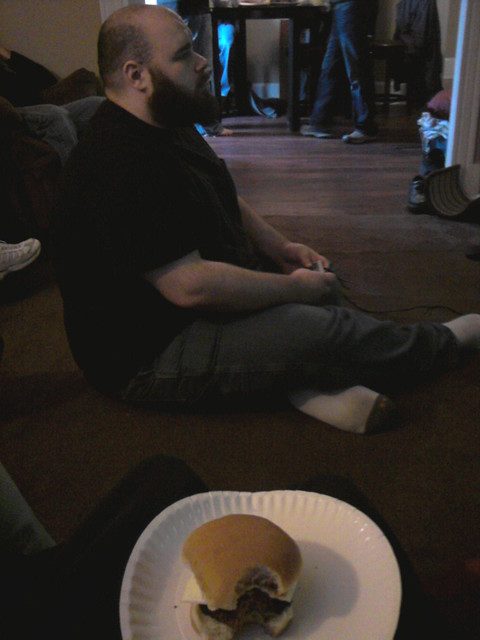 “FEAR THE BEARD!!!” Joe cried as he took on some NES himself. Also, I can has cheeseburger. 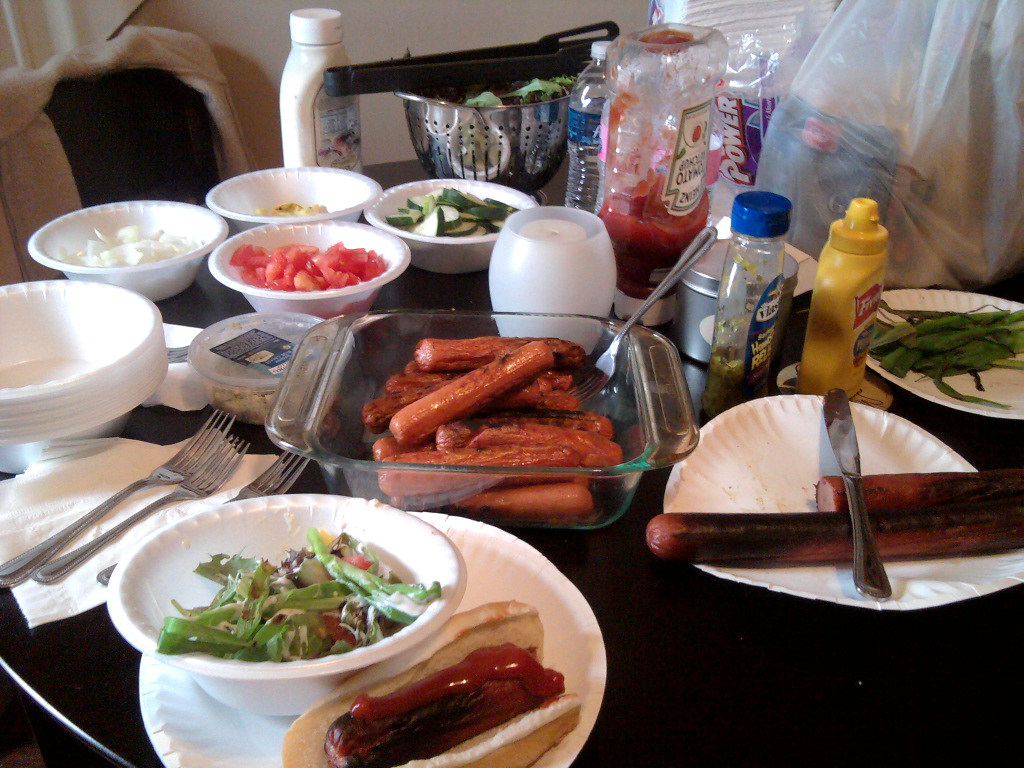 What’s a FAGFest without some hot weiners?! Grill Meister Pappy was happy to oblige our hunger for MEAT! 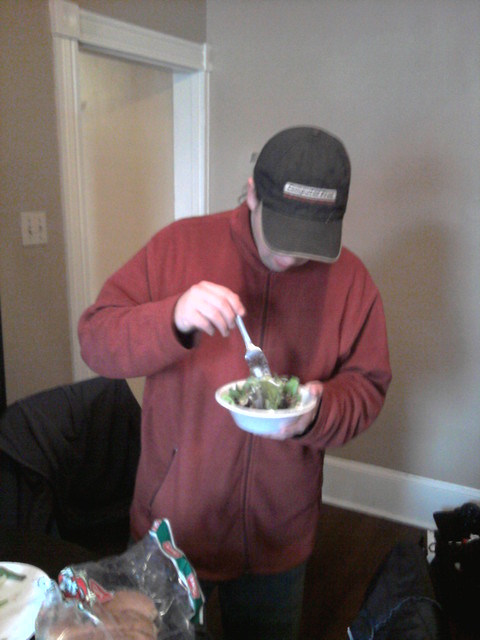 All around awesome (and Bad) Dude Mazedude provided some leafy greens to keep it healthy and we had some awesome salads. 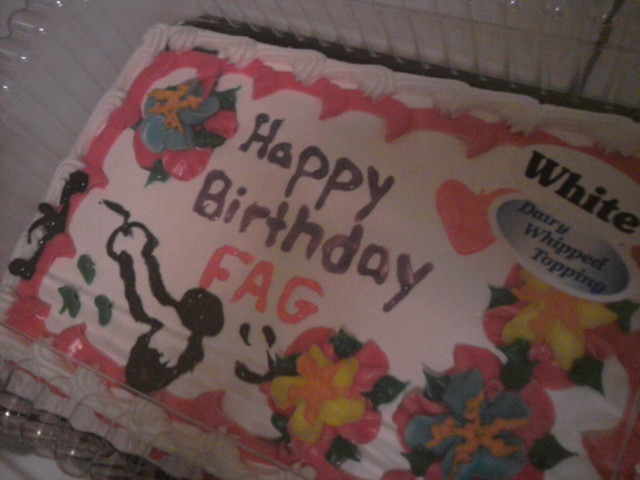 The cake was NOT a lie. Josh celebrated his birthday FAGFest style! 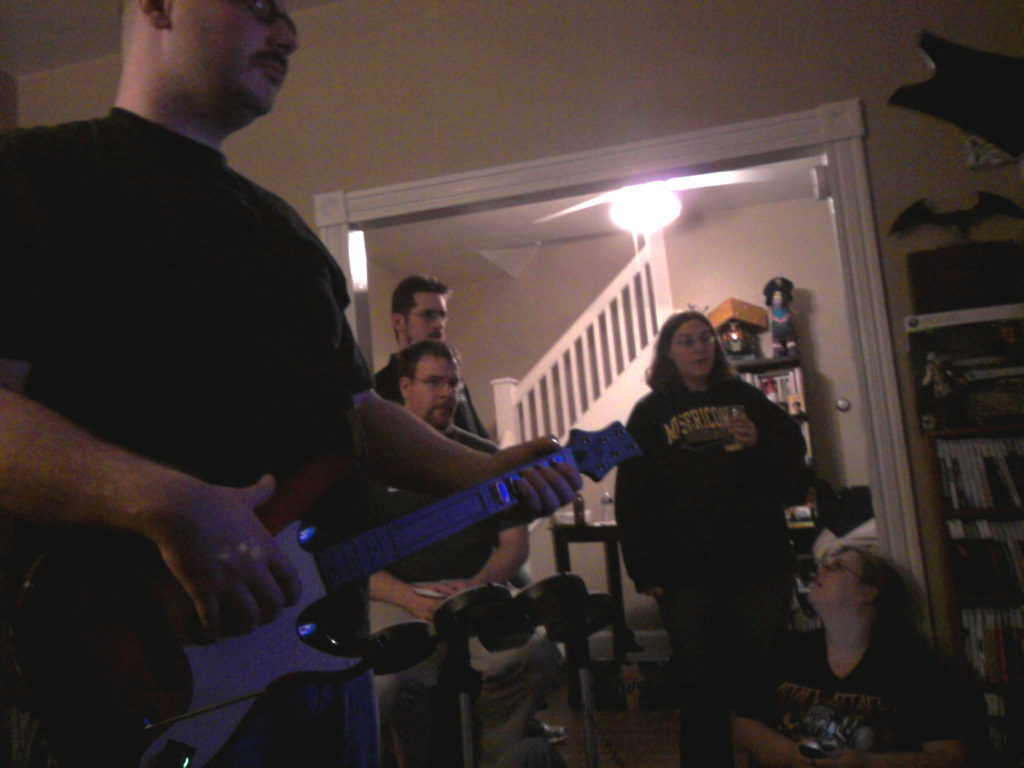 The biggest hit at the party game-wise was Rock Band. Here Mr. Shael Riley rawks it up as Steve “D-Lux” King readies to smash the drums. 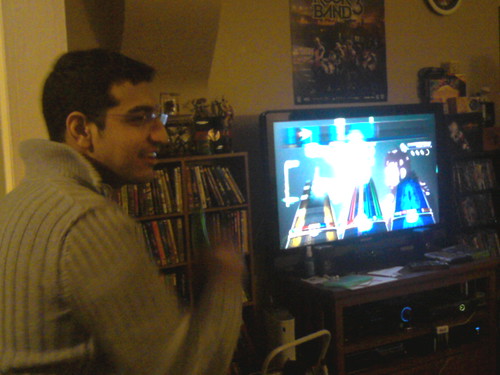 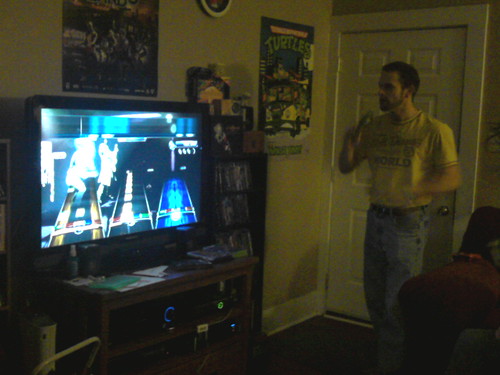 Kunal looks on as Mazedude tests his vocal chords. 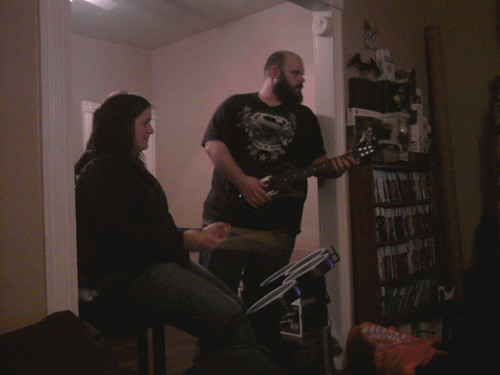 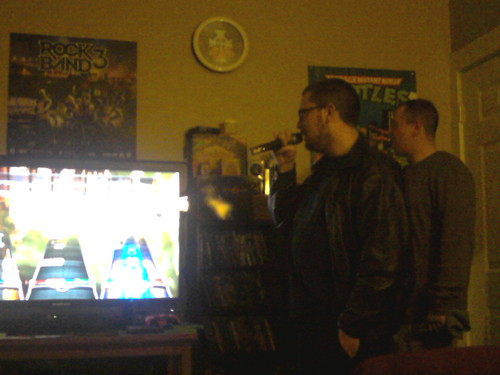 Duet of Gabe and Pappy with Joe Casually strumming in the corner. 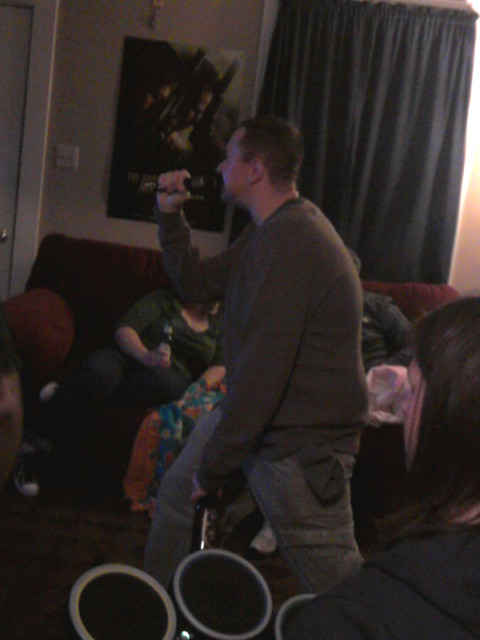 The highlight of every FAGFest HAS to be Pappy’s singing. Lookit that power stance…quite contrary to his excellent falsetto! 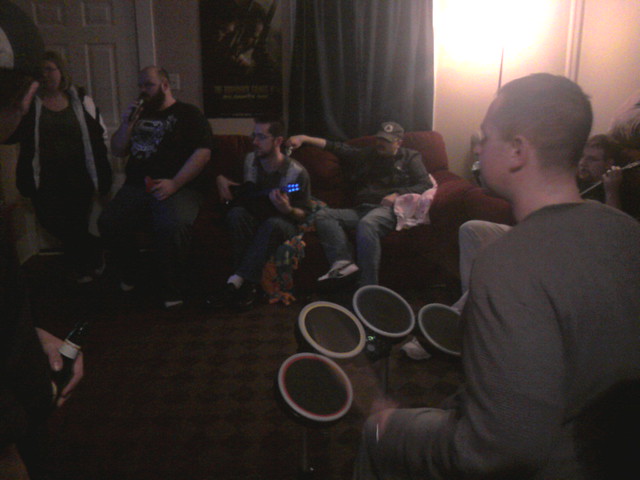 He also is a WIZ on the drums. 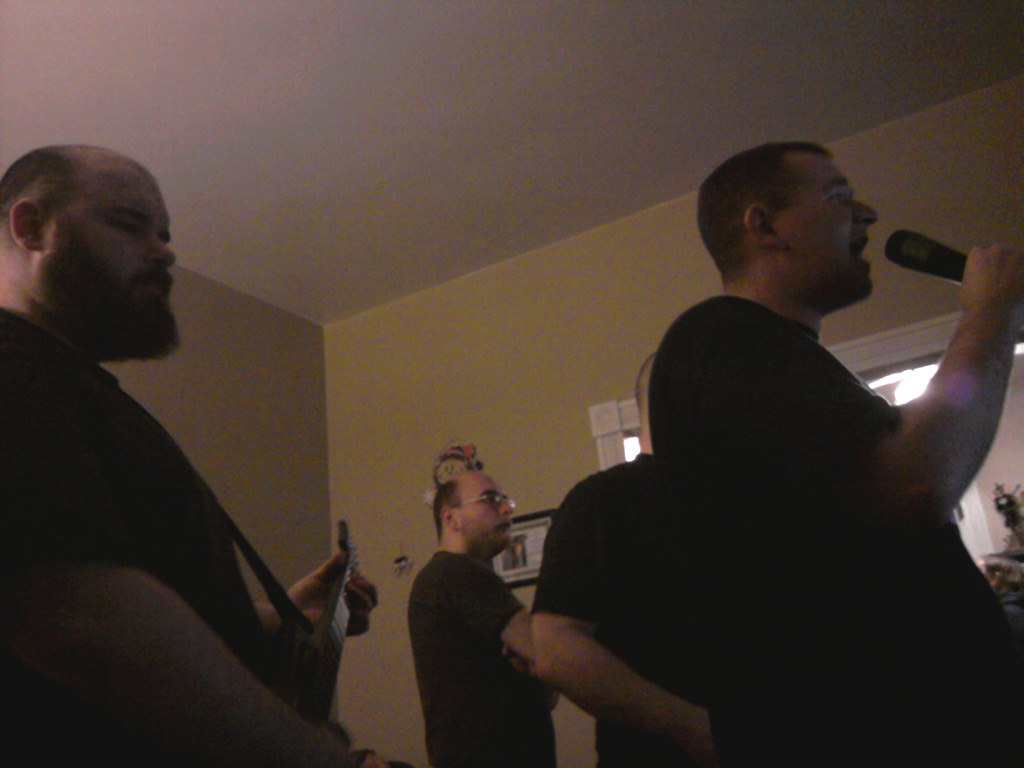 But seriously…what PASSION! <3 (I mean…wut?)

Sorry it cuts off so awkwardly. JoeCam was a good sport, and ended up downloading a Nickelback song and performing it later on. Awww. He cares. 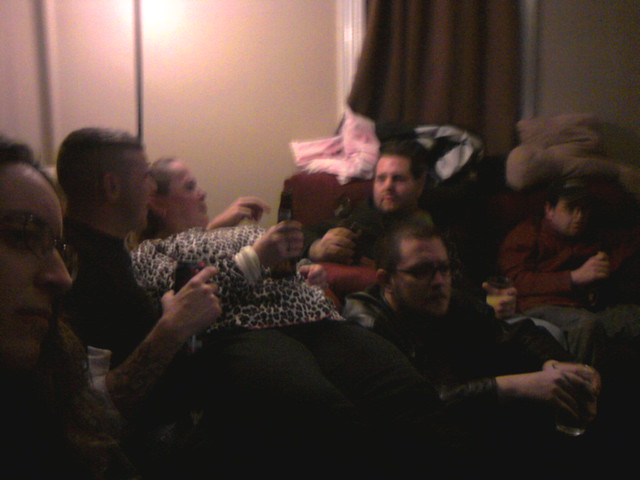 All in all I can’t say enough about how awesome this collection of people is. We meet so infrequently over the years it’s always exciting to re-discover them and catch up, even if it is for just a short weekend. I look forward to seeing most of them again next year at MAGFest 2011, then perhaps again in a Springtime edition of FAGFest! 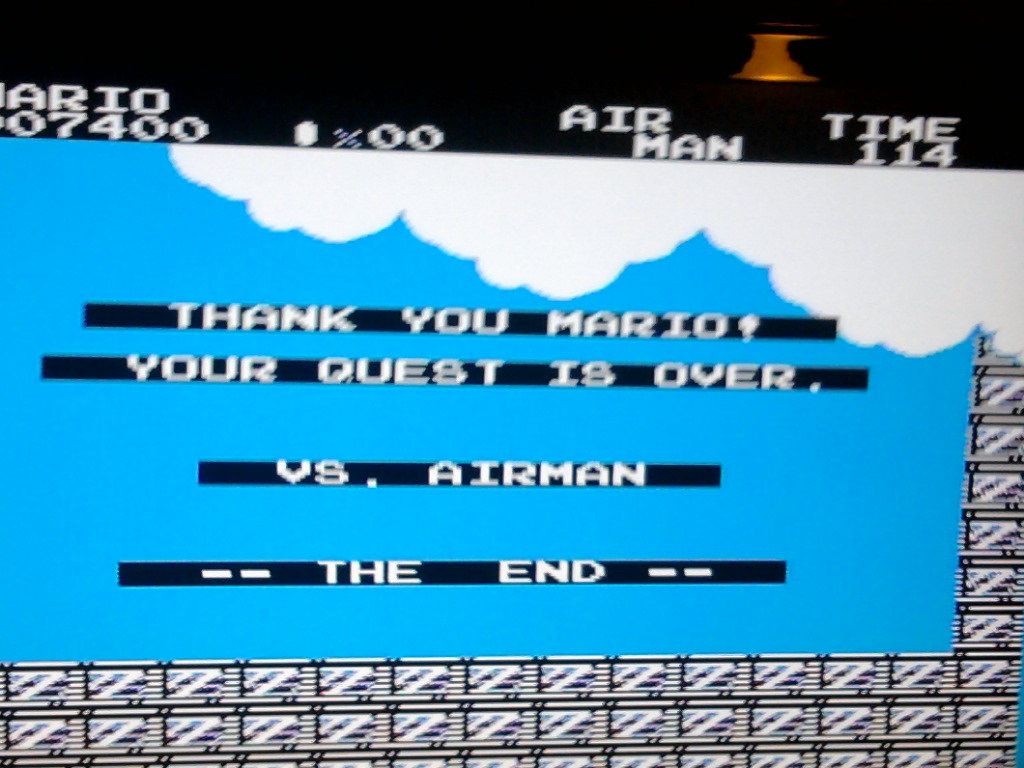 (Note: D-lux was the only guy who was able to beat Air Man Vs. Mario, so Kudos!)

P.S. – See more photos from the party at MY FLICKR 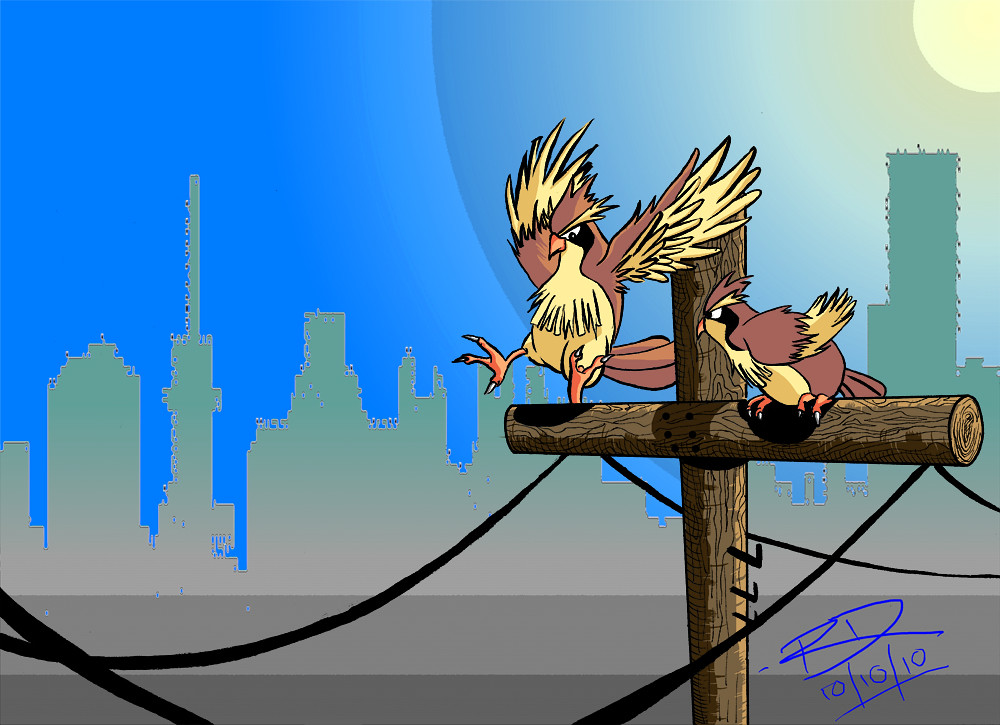 Here’s a couple pidgey hangin’ out over a 8-bit-ish city skyline. Just thought I’d try for a quiet moment.